So the big joke is, everyone might be getting a refund check because of the high excise tax on Marijuana in Colorado this past fiscal year. Whether or not we’ll ever see this money remains to be seen. One thing we can see, is that the old picture of weed, guns, and tons of cash is slowly being replaced by a picture of weed, W2’s, and still tons of cash.

But before we get to the good stuff, I’d like to introduce myself and let you know why I’m a trustworthy outlet for cannabis information. I’ve been in the Colorado marijuana industry for almost 4 years now.  From day one, I’ve worked hard to establish myself as a reliable and trustworthy employee. As you might imagine, the majority of the demographic that chooses to work in the weed industry is stereotypically lazy, half-baked, and often unreliable. There are a lot of college kids, or young people who have dropped out of school who think smoking a ton of weed is criteria for being hired; sorry, no.

I don’t get stoned at work, I have years of customer service background, and most importantly I show up every day with a passion for more knowledge and generating a higher overall respect for this industry. It is not easy to change 60 years of stigma, but humans have been using cannabis for more than 6,000 years (as evidenced by fossil remnants of cannabis seeds in ancient pipes).

To earn a little more of your trust I will step out of my English degree comfort-zone and play the numbers game. A quick look at the total tax revenue collected month by month since the inauguration of retail marijuana sales in Colorado shows a steady upward trend since January 2014: 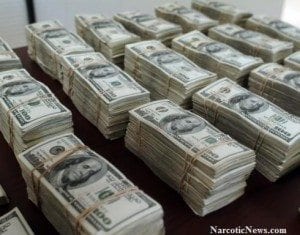 Bottom line: this money translates directly into positive social impact felt by citizens of Colorado. If you can’t get behind an extra 10 million in tax dollars dedicated to public school construction, then I doubt there is much I could do to convince you that taxing legal pot is a good thing. But tax money is not the only benefit of regulating marijuana the way Colorado has.

Let’s look briefly at the trickle-down effect this legal marijuana industry has had on the overall economy. The money generated by the indoor growing of marijuana in warehouses puts millions into the hands of small businesses. These businesses provide electrical work, HVAC, gas services, soil, nutrients and much more. Talking for a few minutes with the management of any of these auxiliary marijuana businesses would quickly confirm that overall revenue for them has only increased since legalization, in some cases tenfold. Not to mention the marijuana company I work for has roughly 50 employees between the grow and storefront alone. We are talking real jobs, real money, and real taxes. Colorado’s is a sustainable model, and one that many other states will be looking to adopt in coming years.

As one of our country’s greatest innovators and founders Thomas Jefferson said, “Hemp is fundamental to the continued success of the economy of the United States.” It would seem more than 150 years since this statement; cannabis is rapidly becoming the next multi-billion dollar American industry. My advice: invest now and watch as your money grows on trees… Marijuana trees that is.