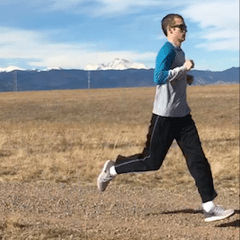 This is my first December on the Front Range of Colorado and I’m thinking someone forgot to tell the weather it’s winter. It has been fairly warm and I’ve taken the opportunity to get out into the mountains to begin training for my upcoming 2018 race schedule. We’re currently finalizing some of the races and in the beginning of the new year, we will be posting our full schedule on mjfitnut.com/events. Until then, I can say I will be committing to complete the entire 2018 La Sportiva Trail Running Series. Consisting of 7 total races spread out from May through September, it’s known as “Colorado’s most iconic trail running series”, and I’m already eager for the first race.

This year I participated in two of the seven races. I managed to take 8th place in the La Sportiva Berry Picker, which was a 4.8 mile climb with 14% average grades, and I also took 4th at the La Sportiva Summer Solstice 5k. Having come so close to reaching the podium, I’m already training with the thought of beating my previous times. I use different strategies when training, 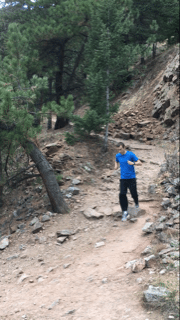 When I hit the trails, I like to hit some fresh flower, or vaporize concentrates just before heading out. When I focus on uphill climbs, which I’ve been doing most recently, I prefer a body high strain like Grape Ape, or Death Star. My knees aren’t as young as they used to be, so the pain relief and anti-inflammatory effects of the cannabinoids help me go longer, and recover faster. Before even leaving for the trail, I always use a topical around my knees for the same reasons. I’ve been using Be-Tru Organic’s Pain Relief Cream and it’s been working great. I also like to eat a protein shake with fruit, Nutiva Hemp Protein, coconut milk, and a couple packets of Stillwater’s Ripple 1:1. Each packet is 5mg THC, and 5mg CBD. I usually eat this about 30-45 minutes prior to starting my run. The nutrients give me the energy I need to put in a good training session, and the cannabinoids help to regulate my overall homeostasis, making for an ideal pre and post workout combo.

On a typical training session, I’ll cover a total of about 10-12 miles, but only running for 5. The rest are made of hiking and photography. After running, and sometime during the hike, I’ll usually stop to do some yoga. I take this time to either light up a little more flower, or vape before trekking back onto the trail. When I get home, I immediately have another shake, basically the exact same as my pre-workout shake, but heavier on carbs and cannabinoids, with added Binske infused honey, which is absolutely incredible. My shake is followed by consuming more flower or concentrates and the next steps for my post training routine are a shower, more infused topicals on the knees and feet, and then it’s onto a full meal consisting of organic whole foods. I keep nutrition simple in the kitchen by sticking to a main carb source like rice, potatoes, or pasta, and I add a bunch of color with as many different vegetables as possible, almost always drenched in delicious olive oil.

What you do in the kitchen and how you take care of yourself before and after training is more important than training itself. You can train all you want, but without proper nutrition, which for me includes the use of cannabinoids from several sources, you won’t make much progress. I tend to cycle through training techniques to challenge myself and try new things to see what works best for me. Let me know in the comments below about your training routines and what role cannabis plays in your overall health and wellness. See you outside!