Home » Confessions of a Budtender » A Grow Facility Field Trip 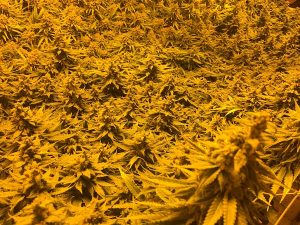 Cannabis blogging seems to have its perks. Last weekend I went on my first ever writing assignment. I visited Colorado Springs to check out some grow facilities and meet some investors who have plans for a much larger facility. What I got was a weekend with a bunch of young cannabis reporters and a group of questionable investors who showed a guy a pretty good time.

Saturday started out with a fat joint of the Scott’s OG. Just what the doctor ordered on this crisp morning to relieve the stress and anxiety of the previous five days. Through a cloudy haze of morning weed smoke, we cruised south out of Denver with a cast that consisted of cannabis reporters and professional weed smokers from the most popular cannabis publications in California, Vancouver, and Colorado. The fall colors outside were popping, as vibrant as the marijuana leaves we would see later that day. The way the autumn sun hits the leaves in Colorado is beautiful, they glow all day. It is like one long sunset. Sitting in the back of an Escalade, cruising down the highway, bonding with some new friends and puffing a doob was a perfect start to the trip. Action Bronson beats blaring through the speakers had me grooving, and we headed south towards Colorado Springs. Beyond the highway the jagged Rocky Mountains off to the west were getting smaller by the minute, resembling waves that were about to crest, eventually turning into what looked like the silhouette of a woman laying on her back. It took us a little over an hour to get to our destination, the steep mountains giving way to mesas and foothills. The terrain in this area reminded me of western paintings you see in cheap hotel rooms.

We bobbed our heads to the music as we entered into the shadow of Cheyenne Mountain and the NORAD military base. Without any disagreement, a second joint was sparked. An eerie calm blankets Colorado Springs and the city lacks the funky vibe that you encounter in Denver. Most likely due to the conservative, military, and evangelical presence that exists there. A straight-laced city on the edge of the wild west. However, the first Colorado cannabis lounges did pop up in Colorado Springs, so the vibrant and the eclectic do live there, it may just be a matter of seeking them out. Our main objective for the day was to visit a location that will eventually house one of the largest indoor grows in the country. Excitement was high for what was ahead, as were we.

We arrived at our meeting place with heavy eyelids and faded grins. Spilling out of the car with a strong odor of weed smoke following closely behind we jumped on a canna-bus to head over to our destination. Along the way we got a chance to meet our hosts, a group of investors out of Arizona called Doyen Elements who had moved to Colorado due to the relaxed weed laws with hopes of setting up a consulting firm that handles many ancillary parts of the cannabis business. Essentially, they do not touch the weed, but they intend to handle real estate, human resources, packaging and serve as a facilitator to anyone who wishes to enter the cannabis market.

They impressed us with speeches about changing the world of cannabis. They discussed how they purchased a piece of land and plan to build the country’s largest indoor grow on it. They discussed the ease of getting all aspects of the cannabis world together under one roof and how with this grow, they would be able to transport up to seventy thousand pounds of cannabis a year to over twenty-five dispensaries.

The first stop on the tour was an abandoned warehouse to show us where they were building this massive grow. Located on the side of the interstate, and abandoned since 2009, I felt like I was going to be murdered at any moment. Luckily the weed I smoked took my mind off the sketchy nature of the environment so I could hear their plan. A plan that, after hearing it, I realized is a little too fantastic to be realistic. At least for Colorado. That is when my bullshit radar started going off. The things they discussed doing are just not feasible for Colorado, and the investment firm seems like they are in bed with cannabis money, so it does not make sense how they could be ancillary? From there we visited a few low-end shops and a couple grows that had more spider mites than the grow I had in my closet in college. The ground outside the grows was littered with cigarette butts and the amount of mold in the facility showed me that this place had not been wiped down since Obama was president. If their small grows had such a lack of care how were they planning on cultivating seventy thousand pounds per year in a massive facility the size of four football fields? Excitement was waning.

They must not have expected someone who has eight years’ experience in the Colorado industry to be on this tour because none of what they discussed was accurate for the current laws the state has. They did not seem to know how the cannabis laws here work, they took us to grows that were infested with mold and bugs to try and impress us, and they lacked a basic knowledge of the industry as a whole. They even mentioned how BHO extractions are illegal, they are not. Something seemed fishy, it felt like a scam. Perhaps somebody was ingesting too much of their own product. None of what they want to do is possible, at least in Colorado. They were funding the weekend though, and I was having a good time. As a smart man once said, “I’d be a fool not to ride this torpedo all the way to the end”.

Their tour ended around mid-afternoon at which point we started drinking. Around the bar I tried to speak to everyone individually, pick apart their plan and question the moves they were making. Nobody could look me in the eye and give me a straight answer, and they were saying things that were flat out lies. My thought is they were attempting to schmooze the cannabis media to extract investment opportunities. So, since I am not a hard-hitting reporter trying to find the smoking gun, I stopped asking questions and enjoyed the ride, I mean why not, they bought the ticket. Hopefully, the weekend would provide an engaging blog. The restaurant they took us to for dinner allowed us to puff our vape pens in our private dining room with our many bottles of wine that were popped and said nothing when we sparked another Scott’s OG up on the back patio. I am not sure what was going on this weekend, but I had a good time. After dinner, we said our stoned goodbyes and shared phone numbers like most do at the end of a long field trip.

I passed out for the ride back to Denver, the darkness outside being less engaging than the sights earlier in the day, remembering very little between the restaurant and the next morning, except for some dope music called Spiritualized this chick Lindsay from MaryJane put on. I felt for a brief moment I was channeling the late Hunter S Thompson, only my mellow and stony weekend in Colorado Springs was short-lived. I liked these cannabis reporters and I liked this scene more than the dispensaries I have lived in since 2009. This trip showed me that maybe I can graduate from the budtender gig to full-fledged cannabis reporter one day. Wouldn’t that be great? Actual reporting on the industry, then I could finally stop arguing with everyone why they should tip their damn budtender.