Home » Confessions of a Budtender » All Cannabinoids Are Not Considered Equal

All Cannabinoids Are Not Considered Equal

One question I get from customers on a daily basis is, “what has the highest THC?” That question bothers me because nobody buys other things based on the highest potency offered. People do not go to the liquor store every time and ask for Everclear. By only looking at the options for the highest in THC customers limit themselves to very few products, and just because something has the highest THC does not necessarily make it the best option. Cannabis has different levels of potency throughout its life. When a plant is harvested, it can have one level of potency. Then, it can have another potency after it has been dried and trimmed. By the time it hits the shelves for the customers to see, the strain probably has yet another potency. Different environments can cause THC to fluctuate, perhaps a strain that is known to have high potency sits on a dry rack for a couple extra days because it was unable to be trimmed. Something as minor as that can cause the THC to change. Then we have the testing facilities where the potency is figured out. Did you know that, in Colorado, three separate labs must test a product? Imagine how much time it takes to do that? If a dispensary sends off samples to get them tested it could take a week to get those tests back, what happens to the potency in that time? Then, if you successfully get your products tested for about three months the state no longer makes it mandatory to further test that product, so what happens if the potency or quality changes after those three months are up? Point being that potency is relative and like I have said in the past, go with what smells good.

Do not concern yourself with minute differences in THC potency either, a percentage here or there will not make or break your buzz. What I would suggest is that you look at the potency of the other cannabinoids as well, and help that make your decision. For example, cannabinoids such as CBD, CBN, DTHC are maybe your magic ingredients for complimenting the THC. The effects of THC are believed to be controlled by the influence of the other cannabinoids in the plant. In other words, cannabinoids work better together than in isolation, it is called the entourage effect. Imagine if the tv show Entourage was about just one of those characters, it would be boring as hell. It took the combined effort of all those boring characters to make it interesting, at least for the first few seasons. Point being that it is not just THC that creates the overall “high” everyone is looking for.

CBD is an attractive cannabinoid, it is the reason cannabis is legal in Colorado, and in some of the less enlightened states in the country, it is the only part of the cannabis plant that will be considered for medical studies. CBD is non-psychoactive and can be used to treat several things from general pain to recent studies that are showing it to help with shrinking of tumors and calming tremors in epileptics. It is helping women to manage menstrual cramps. It helps with inflammation, a root cause of so many medical issues. The quick explanation is that CBD releases pressure on your blood vessels, just imagine the effect that can have on your body. CBD can be used to deal with a headache or a backache, trust me, try some after a rough day of skiing and you will feel that back pain disappear. I have worked in this industry for over seven years I cannot tell you how many people have come back amazed at the effects CBD is having on them over time. One patient described having sensations in a part of her paralyzed hand that she thought she would never have again. Another patient who broke his neck in a skiing accident also had similar things to say after using a transdermal CBD gel on his vertebrae. Patients that are unable to use pain prescriptions from their doctors or perhaps have an opioid dependence have also found CBD beneficial to use in place of prescription. The coolest one I have heard recently is a patient told me CBD has cured their allergies. The patient is a tri-athlete who gets slowed down in races by having to deal with allergies, the patient buys CBD by the truckload because it works better than any allergy medication received elsewhere. Personally, I like to use CBD if I have had a few too many drinks the night before, talk about a legitimate hangover cure. The best part of CBD is that there is no psychoactive head high, it just focuses its magic on your body.

CBD and THC are the cannabinoids that have benefitted from the most research, they are the most concentrated cannabinoids in the plant. There are others, though. When THC is exposed to air it oxidizes and forms CBN. CBN is formed as cannabis degrades, there is usually very little CBN in a fresh plant so it would be tough to find a CBN-rich strain but there are options available. CBN is like CBD, in that it helps with pain and inflammation but CBN has been shown to go a little further in managing insomnia and anxiety. Those are two of the main reasons why people get medical marijuana cards so if you are suffering from those why would you want the cannabis with the highest THC? Side note, CBN will also intensify the effects of THC and that is a pretty cool example of the entourage effect. CBG and CBC are two more “ingredients” that are showing to be anti-fungal and antiseptic that work well in creams. Cannabis is good for your skin, and when mixed with a topical cream can clear up or manage blemishes, scrapes, bruises, eczema, or psoriasis. THCV is the cannabinoid that everyone is asking for these days because in its testing phases, wherever those may be, it is being found to be an appetite suppressant and hopefully something that can assist with obesity issues. “You mean there is weed out there that will not give me the munchies?”. Kind of. THCV is not being tested in Colorado right now so I do not have much firsthand experience with this cannabinoid, but in the past, I have seen strains that have higher levels of THCV (meaning less than 1%). The strains that are high in THCV have usually been the ones that have pure sativa genetics and have a high amount of DTHC, something that Colorado does test for. If you see a product with high levels of DTHC I think you could expect similar results. DTHC is Delta 9 THC, and this cannabinoid intensifies the potent head high you feel when you smoke cannabis. A little-known secret is that DTHC is filtered out in your stomach when you eat an edible. It makes sense then that DTHC would help with an appetite because when you get a strong and active head high you do not tend to sit around and eat. Expect the indica strains to be the ones that give you the munchies.

Next time you visit a shop ask your budtender about the other cannabinoids, you have already had experience with THC so take a chance and try something new. If you are having pain, try CBD. If you are having pain that is mentally hard to manage, try a little THC added to the CBD. If you cannot sleep or relax look for CBN. If you have a blemish on your skin, try a lotion with higher amounts of CBC and CBG. If you want to find the magic ingredient in that head high look for higher levels of DTHC. Point being that cannabis does not end with THC, but for most the barometer for quality seems to just be THC because that is what most people have been familiar with, until recently. Lack of knowledge about cannabinoids should be considered even more of a reason to study them, but with the prohibition laws regarding this plant around the country who knows when we will get the full story. Until then, however, we can use the little information we have to do the experimenting ourselves and I guarantee you it will be without all the negative side effects that come with prescription pills. 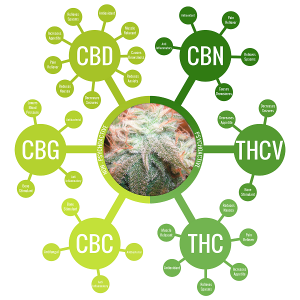 Chris Fisher
Chris grew up in Dover, Delaware with his sights set on the wild west. Inspired by 80’s and 90’s- era ski movies Chris found his way to Gunnison, Colorado in 1999 to attend Western State College, now Western State University, and to ski Crested Butte. In this little mountain town in the heart of the Sangre de Cristo mountains Chris also found a lovely little plant called cannabis. Chris still lives in Colorado, having moved to Steamboat Springs after graduating to follow his love of skiing, mountain biking, and all things outdoors. Currently working as a budtender with 7 years experience in the cannabis industry Chris has a passion for cannabis, a desire to write, and a love for Colorado.
Tagged: #420#cannabis#CBC#CBG#CBN#chronic#confessionsofabudtender#DTHC#THCVaboutboulderbudtenderCBDMarijuanamedicalmarijuanaTHC