Home » Confessions of a Budtender » Weed Memories Never Fade Away 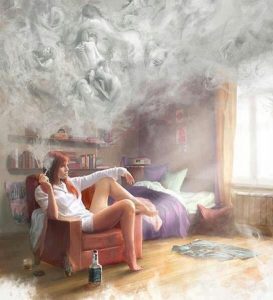 Man, you remember that one time we got high? Yeah…kinda.

One of the things I really enjoy about being a budtender is hearing people’s story’s. If I am helping someone who is in the moment I like to sit back and listen. This is a main function a budtenders job, we listen. Who knows maybe there will be some good information in there? People do not so much come in to hear our stories, although they do ask, it is more about them. Hanging out in a legal weed shop is something some people have waited their entire life for, so I will not rush you out the door. Anyone who does is not a suitable budtender and they can be reviewed on any of the current weed websites (Leafly is a popular one for that kind of thing).

Nothing better than when some old weed smoking hippie comes in telling you a memory about the guy he picked up back in ‘84 who smelled like skunk weed and then they continue to tell you the story like it happened yesterday. They can recall everything about the scenario down to the fact that Van Halen was playing on the tape deck. By the way, damn dude, 1984! Or the older lady who comes in for the third time this week so happy that she is finally able to experience what it is like to use cannabis, something that makes her genuinely happy when she was told her entire life it was a dangerous substance. That is the beauty of all this, it makes people happy, and it can give them fond memories that apparently last a lifetime. I have a few of my own.

It is often said that we are the sum of our memories. I have always liked that, even for the bad ones. Holding onto our good memories can help us to deal with unpleasant situations and retain a positive outlook on life. I have a few really good cannabis memories, and one in particular about the first time I smoked.

The first time I got high was with my older brother and my older cousin. It is one of the fondest memories I have, and unlike many other weed memories, it has not been skewed by time or an abundance of weed smoke thankfully. If my life were a book this page would have highlighter pen all over it. I wonder if they remember it as fondly and as vividly as I do? There are a few moments in my life that stick out as such a high point as this one. Another one involves a woman and a day of wineries, but I will stray from that for now because it did not really involve cannabis, and it was the day I fell in love so that one is private.

I have heard people say they do not get high when they smoke for the first time. Not me, not us, we got really, really high, we were toe up! It was at my cousin’s college graduation, from Vanderbilt University in Nashville, Tennessee. I was a freshman in high school, no wait, it was one year before that. It was a time when my parents had split up and my older brother Ryan meant the world to me. I lost my dad at an early age and my brother quickly became my mentor and my best friend. Whatever he did I wanted to do and I could not believe that I was going on a trip with him to hang out with our older, and much cooler, cousin Michael. These two guys created the Confessionor you see before you today. It was the evening of Michael’s graduation and he purchased a bottle of Dom Perignon to celebrate his big day. We all signed the champagne bottle after we drank it, I wonder if that thing is still floating around somewhere? It was in the mid ‘90’s, a time of fantastic independent film, and that week I was getting a crash course in what cool was. They told me about girls and partying and I tried to act like I was just as cool as they were, I am sure I sounded foolish. We discussed a new filmmaker named Quentin Tarantino a good deal, we watched the first Noah Baumbach movie and the first Roger Avary movie. Michael took us to film school on the Hong Kong style of John Woo and a couple young filmmakers named The Coen brothers. I was even introduced to the Grateful Dead by way of Michael’s ex-girlfriend. I had a glass of champagne, my first for that as well I believe, and we watched Ed Wood and the John Hughes classic Sixteen Candles. We took bong rips. I have never laughed so hard in all my life.

Oddly enough, the part of the memory that sticks out the most is just the three of us hanging out in Michael’s dark, garden level apartment. The connection, the emotional experience I was having with my brother and cousin is what made it so memorable, cannabis just happened to be the lubricant. Boy have we changed. My brother and I do not even like each other anymore and my cousin is so far away I wonder sometimes if I will ever see him again. The rest of our family has gotten bigger and splintered off quite a bit since then so we no longer have family reunions. Sadly, I think the next time the three of us get together may be for a funeral, hopefully, we do not strangle one another.

We have all gotten older and changed a great deal from those boys sitting around giggling at Martin Landau’s portrayal of Bela Lugosi or watching a drunk guy named Long Duck Dong, the Donger. We are still family though, and one day hopefully we will get to do that again. See look, now I sound like one of those old guys. Just please don’t rush me out of your shop.

Chris Fisher
Chris grew up in Dover, Delaware with his sights set on the wild west. Inspired by 80’s and 90’s- era ski movies Chris found his way to Gunnison, Colorado in 1999 to attend Western State College, now Western State University, and to ski Crested Butte. In this little mountain town in the heart of the Sangre de Cristo mountains Chris also found a lovely little plant called cannabis. Chris still lives in Colorado, having moved to Steamboat Springs after graduating to follow his love of skiing, mountain biking, and all things outdoors. Currently working as a budtender with 7 years experience in the cannabis industry Chris has a passion for cannabis, a desire to write, and a love for Colorado.
Tagged: #confessionsofabudtender#FirstTime#HalfBaked#Memory#weed