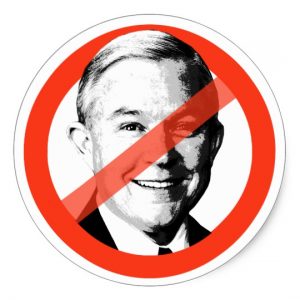 As of this week, Vermont became the first state legislature to pass a bill to legalize recreational marijuana. That may be surprising to you, since eight other states currently have legal recreational weed. The difference? Those states passed public ballot initiatives. So, if signed by Republican Governor Phil Scott, Vermont will remove penalties for possessing one ounce of marijuana or less and allow adults to keep two mature plants. Ahhh, so nice to see a legislature opening its eyes to reasonable drug policy.

Alas, in the same week of continued progress at the state level, “Debbie Downer” Attorney General Jeff Sessions has again reared his backwards, unevolved head. After reviewing forward thinking, Obama-era policies that eliminated Draconian punishments for low-level drug crimes, he is considering a decision of massive regression. Sources indicate that he plans to encourage federal prosecutors to charge people with the most serious provable offenses to trigger mandatory minimum sentences. In other words, this country’s longest, most devastating war still lingers – the War on Drugs.

I’ve discussed mandatory minimum sentences before. To recap, these sentences provide for “one-size-fits-all” sentences of pre-determined lengths. They fail to consider the individual being sentenced or the circumstances of the crime. With mandatory sentences, the judges that are closest to the case are bootstrapped. They no longer have discretion to fasten sentences to fit individual crimes.

The War on Drugs is a direct cause of our ridiculously high incarceration rate and the devastation of entire communities based on low-level and usually non-violent drug crimes. Under Obama, then Attorney General Eric Holder directed prosecutors against mandatory minimum sentencing to reduce the federal prison population and phase out our hideous private prison system.  But, our new administration has a love affair with private prisons. In fact, private prison stock jumped 100 percent after Trump was elected.

Here we sit at a great conundrum. The overwhelming majority of the population desires reasonable drug laws and cannabis decriminalization. Through public ballot initiatives and now with Vermont’s legislative action, those desires are being fulfilled at the state level. Meanwhile, at the federal level, we have a completely regressive administration.

If you have any desire to learn more about this administration’s true rationale for expanding the War on Drugs, go watch the Netflix original film 13th. Then you will understand why, except for Obama, every administration since Nixon has continued this ridiculous drug war. To give you a hint, Sessions is from Alabama, a state that just permitted a city to devolve into segregation. He simply cannot let the tide of public support “roll” towards reasonable cannabis policy.

Emy Taylor
Emy Taylor, raised in Texas, often wears multiple hats. She graduated Magna Cum Laude from Texas Woman’s University in 1996, with a B.S. in History. Emy attended law school at Ohio Northern University, graduating with Distinction in 2001. Before starting a successful litigation career in Dallas, she completed an appellate clerkship with the 13th District Court of Appeals of Ohio. In the evenings, she donned a singer-songwriter hat and gigged multiple nights a week. American Songwriter Magazine recognized her writing in 2013, and she was published in the 2015 anthology, Her Texas: Story, Image, Poem & Song. In 2014, the time came for her outdoor adventure cap to take center stage. Emy donated her professional clothes and headed to remote Alaska with a backpack, guitar, and pen. Next, she made her way to the ghost town of Terlingua, her spiritual home, near Big Bend National Park. Currently, she resides in Downeast Maine, where sea kayaking feeds her soul. So, when the time came to use her legal background to add weed blogger to the hat rack, Emy thought it seemed perfectly fitting.
Tagged: #cannabisculture#habeascannabis#weedlawJeff SessionslegalizationMarijuanaVermont