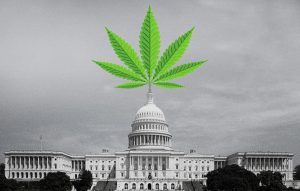 Last week began a multi-part series explaining the United States’ colorful history with marijuana law. That endeavor will be continued next time, as I would be remiss not to mention that at the end of last week, a flurry of marijuana-related bills were introduced into Congress.

If you have been following along, you know that in week two of this blog, I explained legislation was introduced into the House that would remove cannabis from the list of federally controlled substances.  Removing weed from federal criminal jurisdiction does not give the federal government a bite at revenue from the “green” apple though. But we know the best way to entice conservatives is money. Well, a bipartisan quartet of legislators formed the Congressional Cannabis Caucus and announced the “Path to Marijuana Reform” legislative package. This group of proposed laws would both protect existing state-level cannabis laws and create a framework for federal regulation — aka “show me the money” laws. Let’s breakdown some “nuggets of goodness” and the “schwag of reality” concerning these proposals.

From a business standpoint, these bills would provide traditional tax credits enjoyed by other business sectors. The cannabis industry would also finally be able to enter the 21st Century banking world and not be sequestered to a purely cash enterprise. The new legislation would additionally clarify that federal anti-marijuana laws do not apply to any person or business acting in compliance with state law. Our heroes have further sought to widen the customer base for medical marijuana by permitting VA doctors to recommend cannabis for veterans. Yet, probably the best news is, regardless of passage, the sheer number of proposed bills in Congress will surely pave the way to change, especially as more and more states relax their laws.

There are potential negative effects of these legislative efforts. They are unavoidable, however, if the conservative forces in Congress are to be effectively persuaded. The Marijuana Revenue and Regulation Act would force a national tax on marijuana products that would start at 10 percent and escalate to 25 percent in five years. Chomp, chomp on the apple. Will the anti-legalization group be persuaded by this tax revenue in order to pay for a vanity project like Trump’s border wall? Maybe so. There is also the Regulate Marijuana Like Alcohol Act that would place oversight of cannabis in the hands of federal agencies like the U.S. Food and Drug Administration and the Bureau of Alcohol, Tobacco, Firearms and Explosives. There goes that 95 percent THC cookie in your jar. In other words, there may eventually be a pile of regulations and overseers to an already highly regulated industry in the states that have legalized it. But hey, we can’t have our weed cake and eat it too.

Emy Taylor
Emy Taylor, raised in Texas, often wears multiple hats. She graduated Magna Cum Laude from Texas Woman’s University in 1996, with a B.S. in History. Emy attended law school at Ohio Northern University, graduating with Distinction in 2001. Before starting a successful litigation career in Dallas, she completed an appellate clerkship with the 13th District Court of Appeals of Ohio. In the evenings, she donned a singer-songwriter hat and gigged multiple nights a week. American Songwriter Magazine recognized her writing in 2013, and she was published in the 2015 anthology, Her Texas: Story, Image, Poem & Song. In 2014, the time came for her outdoor adventure cap to take center stage. Emy donated her professional clothes and headed to remote Alaska with a backpack, guitar, and pen. Next, she made her way to the ghost town of Terlingua, her spiritual home, near Big Bend National Park. Currently, she resides in Downeast Maine, where sea kayaking feeds her soul. So, when the time came to use her legal background to add weed blogger to the hat rack, Emy thought it seemed perfectly fitting.
Tagged: #cannabisculture#habeascannabis#weedlawCannabis CaucuslegalizationMarijuanamarijuana reform