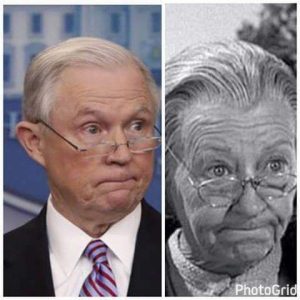 The countdown is on. Funding for the federal government runs out at midnight tonight. Will our broken Congress be able to agree on a new spending bill in time? Or, is Attorney General Jeff Sessions about to be green-lighted to get out his shotgun “Granny-style” on the doorsteps of medical marijuana shops? I see the confusion brewing. Let me explain why this spending bill has anything to do with legalized medical marijuana.

In a nutshell, when the government’s funding ends, all non-essential government operations and agencies are suspended until a new budget is approved. By “non-essential” think national parks. When I say essential, think Sessions’ Justice Department.

For the last several years, state-legal medical marijuana programs and patients have been protected from federal prosecution through a spending rider known as the Rohrabacher-Farr Amendment. In effect, this law precludes Sessions and his cronies from spending money to prosecute the medical cannabis community. If Congress fails to come to terms on a spending bill, this protection disappears.

Sources do indicate that they will likely pass a short-term, stop-gap bill to take the budget fight into next week. So, we may not need to be overly concerned. In addition, this week Colorado Governor John Hickenlooper revealed his private discussions with our Attorney General. Sessions seemed to indicate that he would not be shutting down cannabis businesses that are legal at the state level. Although, Sessions was sure to make clear that he is intensely against legalized drugs and that he doesn’t feel “that he should be cutting any slack to marijuana.” Hickenlooper felt confident that he was primarily referring to illegal cartel-like activities – those that grow weed in states like Colorado and then sell it in states where it’s not legal.

Still, like me, you may question anything this administration says given its “flip-flop” mentality on so many issues in such a brief period. And, this just shows the narrow precipice upon which the legal marijuana industry sits. In the event of a government shutdown at midnight tonight, the medicinal cannabis community should be prepared to handle a knock on the door by “Granny Sessions.” Should that happen, if I remember correctly, “possum innards” are some of her favorite treats.

Emy Taylor
Emy Taylor, raised in Texas, often wears multiple hats. She graduated Magna Cum Laude from Texas Woman’s University in 1996, with a B.S. in History. Emy attended law school at Ohio Northern University, graduating with Distinction in 2001. Before starting a successful litigation career in Dallas, she completed an appellate clerkship with the 13th District Court of Appeals of Ohio. In the evenings, she donned a singer-songwriter hat and gigged multiple nights a week. American Songwriter Magazine recognized her writing in 2013, and she was published in the 2015 anthology, Her Texas: Story, Image, Poem & Song. In 2014, the time came for her outdoor adventure cap to take center stage. Emy donated her professional clothes and headed to remote Alaska with a backpack, guitar, and pen. Next, she made her way to the ghost town of Terlingua, her spiritual home, near Big Bend National Park. Currently, she resides in Downeast Maine, where sea kayaking feeds her soul. So, when the time came to use her legal background to add weed blogger to the hat rack, Emy thought it seemed perfectly fitting.
Tagged: #cannbisculture#habeascannabis#weedlawJeff SessionslegalizationMarijuanamedical marijuanamedicinalRohrabacher-Farr Amendmentspending bill