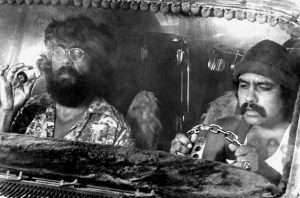 When we talk about policy changes regarding legalization of marijuana, there are always people that immediately go into “reefer-madness-code-red-alert!” mode out of concern for driver safety. Telling them to take a hit and calm down goes over like a lead balloon. So instead, let’s talk facts and be reasonable. Marijuana is less dangerous than alcohol and, like alcohol, the deterrent effect of a DUI arrest applies.

In the first large-scale controlled study of drug and alcohol crash risk by the National Highway Traffic Safety Administration, there is no significant increased crash risk associated with cannabis use, alone. Agency findings that controlled for variables, like alcohol, and measured actual cannabis use, often found reduced or no crash risk associated with weed. Perhaps there is something to the joke that stoners drive slow, after all. The truth is, cannabis does not typically make people lose all inhibition, like alcohol. To illustrate, in pot-legal Colorado, 72 percent of its frequent cannabis users do not drive, at all, when partaking.

The other thing that legalization naysayers should keep in mind is that driving stoned is illegal, just like driving under the influence of alcohol. True, Cannabis breaks down in the body differently than alcohol, which makes chemical testing by law enforcement less accurate. A driver may have ingested marijuana days before a blood test, yet the test would still register “hot” for cannabis consumption. Depending on a police officer’s other evidence of impairment, chemical testing alone is often not enough to convict. Still, the deterrent of pre-conviction penalties and the financial burden associated with an arrest for driving under the influence of marijuana should ease people’s minds about a drastic influx of joy-riding potheads.

Officers make DUI arrests for driving high much the same way they do for drunk driving: the combination of field sobriety tests, chemical testing, and other observed behaviors, and/or physical evidence. Let’s look at it this way, if a cop pulls over a Grateful Dead stickered VW bus for something as minor as a license plate lamp being out, they are probably going to claim that an odor of marijuana was emanating from the vehicle and the driver’s eyes were bloodshot. The officer will then ask the driver to perform a variety of “stupid human tricks” and may ask them to succumb to a blood test. If the jurisdiction is tech-savvy, they might even use a nifty road-side “potalyzer” test. All of this evidence taken together could lead to an arrest and possible conviction. And here’s the catch, even if the driver refuses to participate, in most states, including Colorado, their license will be suspended. The suspension will be applied regardless of a criminal conviction.

So hey, there’s lots of rhetoric floating around, but don’t believe everything you hear. The floodgates are not going to suddenly open and release loads of reckless drivers if marijuana becomes legal in your state.

Emy Taylor
Emy Taylor, raised in Texas, often wears multiple hats. She graduated Magna Cum Laude from Texas Woman’s University in 1996, with a B.S. in History. Emy attended law school at Ohio Northern University, graduating with Distinction in 2001. Before starting a successful litigation career in Dallas, she completed an appellate clerkship with the 13th District Court of Appeals of Ohio. In the evenings, she donned a singer-songwriter hat and gigged multiple nights a week. American Songwriter Magazine recognized her writing in 2013, and she was published in the 2015 anthology, Her Texas: Story, Image, Poem & Song. In 2014, the time came for her outdoor adventure cap to take center stage. Emy donated her professional clothes and headed to remote Alaska with a backpack, guitar, and pen. Next, she made her way to the ghost town of Terlingua, her spiritual home, near Big Bend National Park. Currently, she resides in Downeast Maine, where sea kayaking feeds her soul. So, when the time came to use her legal background to add weed blogger to the hat rack, Emy thought it seemed perfectly fitting.
Tagged: #cannabisculture#habeascannabiscannabisDUIDWIlegalizationMarijuanamarijuana lawpotalyzer