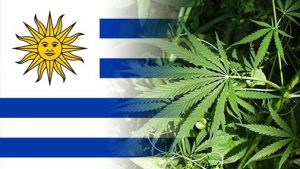 I bet if you were asked what country was the first to legalize cannabis from production to consumption, you probably would not think, “duh, Uruguay!” But it’s true. Although recreational drug consumption has never been outlawed in this open minded, liberal country, the cultivation and sale of cannabis remained forbidden. This month, however, pot smokers in Uruguay became the first in the world to sign up to buy state-produced weed for recreational use.

How the law works is somewhat fascinating. Legal marijuana will only be available at pharmacies. Those wanting to purchase legal cannabis will sign up with the marijuana registry and submit their thumbprint. Then, they can stroll into a participating pharmacy, scan their thumbprint, and purchase state-vetted pot.

So, what gives with the thumbprint? Well, the state monitors consumption, allowing each person to buy up to 10 grams per week or 1.4 ounces per month. The thumbprint also protects the privacy of those purchasing weed. Pharmacists will not see the names of those making purchases, only the amount each “thumbprint” has available per its weekly quota. On the government side, only seven officials will have access to the full registry, and to retrieve any names from it, three of them will need to be present.

A major difference with Uruguay’s state production, as compared to private production here in the States, is that the price is highly accessible. Sources indicate $1.30 per gram, as opposed to approximately $3.00 per gram on the street. Obviously, this could promote reduction of black market sales, something that expensive dispensary prices in the United States does not necessarily do.

Perhaps more conservative states in America could be swayed with this type of limited use system. Could a similar structure work in a conservative state like Texas? The state could monitor the strength and the quantity of those using marijuana, while simultaneously cracking down on anyone buying or selling outside state-sponsored channels. As more and more states in America legalize recreational cannabis, it will be interesting to see how many different systems are created to address individual state concerns.

Oh, in case you were wondering, Uruguay also permits growing at home for personal use and smoking in designated clubs. Who knew I was moving to Uruguay?!

Emy Taylor
Emy Taylor, raised in Texas, often wears multiple hats. She graduated Magna Cum Laude from Texas Woman’s University in 1996, with a B.S. in History. Emy attended law school at Ohio Northern University, graduating with Distinction in 2001. Before starting a successful litigation career in Dallas, she completed an appellate clerkship with the 13th District Court of Appeals of Ohio. In the evenings, she donned a singer-songwriter hat and gigged multiple nights a week. American Songwriter Magazine recognized her writing in 2013, and she was published in the 2015 anthology, Her Texas: Story, Image, Poem & Song. In 2014, the time came for her outdoor adventure cap to take center stage. Emy donated her professional clothes and headed to remote Alaska with a backpack, guitar, and pen. Next, she made her way to the ghost town of Terlingua, her spiritual home, near Big Bend National Park. Currently, she resides in Downeast Maine, where sea kayaking feeds her soul. So, when the time came to use her legal background to add weed blogger to the hat rack, Emy thought it seemed perfectly fitting.
Tagged: #cannabisculture#habeascannabis#weedlawlegalizationMarijuanaUruguay