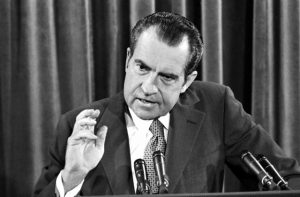 To all our readers, happy 4/20! According to today’s CBS poll, 61% of America wants marijuana legalized. Happy 4/20, indeed.

I’m excited to get back into another installment of Weed Law 101. As indicated in prior blogs, U.S. officials have been informed time and time again through scientific and objective studies that marijuana is not a “gateway drug”, does not cause violence, and does not induce addiction. Yet, federal policy has fluctuated greatly between being very strict to quite relaxed on cannabis. Why such inconsistency? The answer to that is not due to new revelations about the drug’s effect on people – weed is still weed. The changes have largely been politically motivated. Those in power craft strategies for ulterior motives, including keeping themselves in power.

As discussed last week, the 1960’s marked a policy shift away from a criminal punishment approach to drugs to an emphasis on treatment. By 1970, one-third of the U.S. lived in states that had decriminalized marijuana, and the remaining majority of states had otherwise eased their stance. The federal government passed the Comprehensive Drug Abuse Prevention and Control Act, which repealed most mandatory minimum sentences that had done nothing to eliminate the marijuana culture of the 1960’s.

Still, President Richard Nixon made cannabis a Schedule I drug under Title II of that legislation, the Controlled Substances Act. This was to be a temporary placement pending the results of a Commission he appointed to study cannabis. The Commission’s findings called for the decriminalization of marijuana possession. Nixon disregarded these findings. As a result, to date, marijuana joins the most dangerous drugs as a Schedule I narcotic. For perspective, cocaine is not even listed on Schedule I. Nixon then took things a step further and declared a “war on drugs.’” Umm, wait, huh? WHY???

We know from White House tapes that Nixon had no problem spitting our racial slurs ad nauseam. After his presidency, John Ehrlichman, counsel and Assistant to the President for Domestic Affairs under Nixon, is quoted as saying the following:

The Nixon campaign in 1968, and the Nixon White House after that, had two enemies: the antiwar [Vietnam] left and black people. You understand what I am saying? We knew we couldn’t make it illegal to be either against the war or black, but by getting the public to associate the hippies with marijuana and blacks with heroin, and then criminalize them both heavily, we could disrupt those communities. We could arrest their leaders, raid their homes, break up their meetings, and vilify them night after night on the evening news. Did we know we were lying about the drugs? Of course we did.

And so it began. The longest “war” in our nation’s history that continues to plague us today. A war that identifies cannabis as a “gateway drug”, despite all evidence to the contrary. We are hearing that phrase from current Attorney General Jeff Sessions. He spouted off recently that weed is hardly different than heroin. He also has a past of racially charged commentary, not to mention being a proponent of the private prison industry. Connect the dots. Time and time again, the United States government develops drug policies to declare that certain people should be locked up for the benefit of those in power.

I want this to sink in.  We will delve further into this quagmire in subsequent blogs. There is worse still to come. Tune in.

Emy Taylor
Emy Taylor, raised in Texas, often wears multiple hats. She graduated Magna Cum Laude from Texas Woman’s University in 1996, with a B.S. in History. Emy attended law school at Ohio Northern University, graduating with Distinction in 2001. Before starting a successful litigation career in Dallas, she completed an appellate clerkship with the 13th District Court of Appeals of Ohio. In the evenings, she donned a singer-songwriter hat and gigged multiple nights a week. American Songwriter Magazine recognized her writing in 2013, and she was published in the 2015 anthology, Her Texas: Story, Image, Poem & Song. In 2014, the time came for her outdoor adventure cap to take center stage. Emy donated her professional clothes and headed to remote Alaska with a backpack, guitar, and pen. Next, she made her way to the ghost town of Terlingua, her spiritual home, near Big Bend National Park. Currently, she resides in Downeast Maine, where sea kayaking feeds her soul. So, when the time came to use her legal background to add weed blogger to the hat rack, Emy thought it seemed perfectly fitting.
Tagged: #cannabisculture#habeascannabis#weedlawlegalizationMarijuanaNixonracismShafer CommissionWar on Drugs