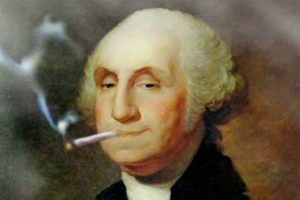 Part 1: Blame It On Mexico

Marijuana law and policy is complicated. As with all political issues, understanding where we have been historically is crucial to deciding where we should go. A little history helps put things in perspective and contributes to crafting reasonable drug laws. I present to you the first installment of Weed Law 101.

This country’s on and off again love affair with cannabis started long before this nation was formed. Beginning as early as the 1600s, North American settlers encouraged hemp production for the manufacture of rope, sails, and clothing. (By hemp, I mean the parts of the plant that don’t get you high – stalks and stems – as opposed to “marijuana”, which traditionally referred to a mixture of buds and leaves.) In 1716, the Virginia Assembly required farmers to grow hemp and it was used as legal tender in Pennsylvania, Virginia, and Maryland. So, when Slater on Dazed and Confused says that George Washington grew “fields of that stuff, man”, he wasn’t completely off the mark.

While the hemp industry continued to flourish, in the late 1800s, the United States saw an increased use of marijuana in medicinal products, which were sold openly at local pharmacies. The medicinal use of cannabis was not a late 20th century brainchild. As early as 1853, marijuana use was dubbed a “fashionable narcotic.” When the federal government finally got involved in 1906, the Pure Food and Drug Act simply required labels on any over-the-counter remedies. In Congressional hearings for anti-narcotic legislation, no one believed cannabis was a problem of any major significance that needed to be included. So, what the hell happened? When and why did America decide to demonize weed?

There seems to always be conservative elements in our culture willing to use racial prejudice to push their agenda. Prohibitionists already associated marijuana use with black America and that “evil, sexually suggestive” jazz music. They literally equated marijuana use with white women taking their pants off for black musicians. At the same time, after the Mexican Revolution of 1910, immigrants flooded across the border. Recreational pot use became associated with Mexicans, spawning more white fear and prejudice. Anti-drug campaigns warned against the “Marijuana Menace” and wrongly attributed horrible crimes with the drug and the Mexicans that used it.

Then, in the 1930s, massive unemployment during the Great Depression caused public resentment towards these immigrant workers and escalated smear campaigns to link marijuana with violent crime and this “racially inferior” class. After a lurid propaganda campaign, including the film, “Reefer Madness,” Congress passed the Marijuana Tax Act in 1937, to criminalize the “evil weed”. Interesting how we use race and cultural differences as swords to shape policy in Washington even to this day – “Build that wall! Ban Muslims!” Not surprisingly, in 1944, the New York Academy of Medicine issued a thorough report detailing that cannabis did not induce violence, insanity, addiction, or use of other drugs.

Emy Taylor
Emy Taylor, raised in Texas, often wears multiple hats. She graduated Magna Cum Laude from Texas Woman’s University in 1996, with a B.S. in History. Emy attended law school at Ohio Northern University, graduating with Distinction in 2001. Before starting a successful litigation career in Dallas, she completed an appellate clerkship with the 13th District Court of Appeals of Ohio. In the evenings, she donned a singer-songwriter hat and gigged multiple nights a week. American Songwriter Magazine recognized her writing in 2013, and she was published in the 2015 anthology, Her Texas: Story, Image, Poem & Song. In 2014, the time came for her outdoor adventure cap to take center stage. Emy donated her professional clothes and headed to remote Alaska with a backpack, guitar, and pen. Next, she made her way to the ghost town of Terlingua, her spiritual home, near Big Bend National Park. Currently, she resides in Downeast Maine, where sea kayaking feeds her soul. So, when the time came to use her legal background to add weed blogger to the hat rack, Emy thought it seemed perfectly fitting.
Tagged: #cannabisculture#habeascannabis#weed#weedlawcannabislegalizationMarijuanapoliticsprejudiceReefer Madness