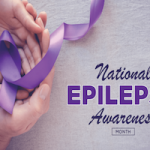 Did you know that November is Epilepsy Awareness Month?  November was declared National Epilepsy Awareness Month in 2003 to help end the stigma surrounding the condition and to generate education and understanding for those living with epilepsy. People all around the country get involved and show support for epilepsy awareness to help promote change for those who are affected. I am one of approximately 3.4 million people in the U.S. living with epilepsy and 65 million people worldwide. Those affected by the condition are more than those affected by autism spectrum disorders, Parkinson’s... Read More