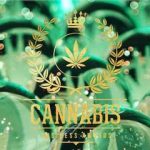 The 7th Annual Cannabis Business Awards was held last Wednesday, at the Hilton City Center, in downtown Denver, CO. The event was created to celebrate outstanding achievements with industry games changers, trailblazers, and cannabis thought leaders. It was an incredible night of networking and fun within the cannabis industry. Several athletes were nominated for different awards, some participated as presenters, and former NHL player, Riley Cote, took home the Activist of the Year Award! Co-hosting the event, alongside Chloe Villano who is the founder and producer of the Cannabis Business Awards,... Read More