There are thousands of herbs being utilized for various medical ailments and these are not going anywhere soon. In fact, tradition is finally being examined scientifically, and the discoveries of herbal combinations for ultimate health benefits are being revealed.

Cannabis and Chili Peppers: In April 2017, researchers featured in the journal of Proceedings of the National Academy of Sciences found that both capsaicin and marijuana are both interactive with the same gut receptor. This receptor is TRPV1, and both capsaicin and marijuana cause the cells to produce Anandamide, which was found to have a calming effect on the immune system. In mice, a greater presence of Anandamide in the cells leads to a decrease in gut inflammation. Further studies are needed, but this finding may lead to combining the two herbs for medication providing relief for several digestive system issues.

Turmeric and Black Pepper: This combination was discovered my researchers in 1998. Turmeric is well known for its cancer fighting properties and as a powerful protector of the liver and stomach. It has even been indicated for fighting depression. The problem with turmeric is when taken alone, the liver metabolizes it very quickly, and very little actually makes it to the bloodstream. A study by Joseph et al. found that combining turmeric and black pepper, which is known to inhibit liver metabolism significantly increased turmeric levels in the blood by about 2000 %. With turmeric actually available in the bloodstream thanks to the pepper, it can do its work decreasing inflammation throughout the body.

Acetaminophen and Skullcap: Acetaminophen inhibits COX-2 expression. Cox-2 expresses itself in the form of inflammation, specifically brain inflammation, which leads to headaches. In 2016, Bae et al. found that combining Acetaminophen with Skullcap significantly decreases COX-2 expression, which was more effective in reducing brain inflammation than with either medicine alone. Skullcap alone was excellent in reducing headaches by itself and also showed a strong anti-oxidant effect as well. When you feel a pounding headache coming on and pop acetaminophen, try taking skullcap along with it to melt the pain away.

So next time you are experiencing inflammation in the gut, brain or throughout the body, consider combining these herbs for greater relief. There is amazing future potential with both herb-herb combinations as well as herb-pharmaceuticals, but there are dangers as well, so always make sure to speak to a professional before combining any medicinal herbs. The herbs presented here are relatively safe and are not known to negatively with other medicines. 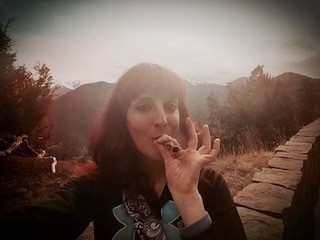 Erin Warwick
Erin Warwick has experimented with medicinal plants for over 20 years and is currently studying for her Master’s Degree in Herbal Therapeutics at Maryland University of Integrative Health. On top of this, she is a fitness expert and Personal Trainer who received a degree in Kinesiology from the University of Illinois. When not immersed in plant matters, she can be found running heavy-duty obstacle coarse races or hanging out with her kids and pets. She thrives to help others obtain full body, mind and spirit health and wellness, and is particularly interested in unlocking the medicinal powers of cannabis and other amazing plants.
Tagged: #cannabis#herbalmedicine#turmericaboutboulder