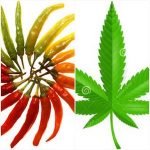 There are thousands of herbs being utilized for various medical ailments and these are not going anywhere soon. In fact, tradition is finally being examined scientifically, and the discoveries of herbal combinations for ultimate health benefits are being revealed. Cannabis and Chili Peppers: In April 2017, researchers featured in the journal of Proceedings of the National Academy of Sciences found that both capsaicin and marijuana are both interactive with the same gut receptor. This receptor is TRPV1, and both capsaicin and marijuana cause the cells to produce Anandamide, which was found to have... Read More