Two Sides of the Same Cannabis: Comparing THC and CBD

Though cannabis plays host to at least 85 different cannabinoids, there are two who tend to grab the most time in the spotlight: tetrahydrocannabinol (THC) and cannabidiol (CBD). You’ve probably heard talk—or formed opinions yourself through careful research of your own—about preferences of marijuana users for certain strains that give them that amazing head high or, conversely, those who prefer a nice, mellow body buzz.

These differences can be attributed to the makeup of a particular strain and its ratios of THC to CBD. Beyond the effect these two cannabinoids have on recreational experiences, their contrasting behavior with the body’s cannabinoid receptors also contributes to a host of differing medicinal properties as well.

To compare the two effectively, it’s important to understand how each one reacts with our brains and central nervous systems, specifically the cannabinoid 1 (CB1) receptors located there. 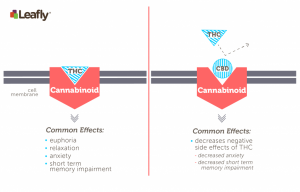 THC is the one that is shaped to fit exactly into a CB1 receptor, like a key made specifically for its lock. Because of this, THC is known as a CB1 receptor agonist, one that activates the receptor anytime they get together. This reaction produces much of the same effects as when the naturally-occurring neurotransmitter anandamide makes that same connection with a CB1 receptor. The result?—a mimicry of “the bliss molecule” and the psychoactive effects you know and love from ole’ THC (more on that later).

When it comes to being a perfect fit, for CBD it’s not so much. In fact, CBD works more on the effects of present THC than it does that actual CB1 receptors. CBD can counteract the psychoactive effects of THC by acting as a sort of barrier between it at the CB1 receptors, lessening some of its less savory byproducts like anxiety.

That handy graphic from Leafly depicts the differences how THC and CBD bond with their receptors.

Leafly also reports that another type of cannabinoid receptor, CB2, is located primarily throughout the body instead of the brain, and it actually acts as a much more suitable bonding partner for CBN.

Thanks to the differences between the two, THC and CBD lend their cannabinoid power to provide treatment for a number of conditions. Let’s break down their basics.

It’s apparent that these two cannabinoids work synergistically for marijuana users, especially those who list medicinal benefits as the number one reason for their consumption.

Remember that not all marijuana strains are created equal when it comes to their ratios of THC and CBD. Ask your budtender which strains will help you craft the personal experience you’re seeking and/or provide the most relief from what ails you. 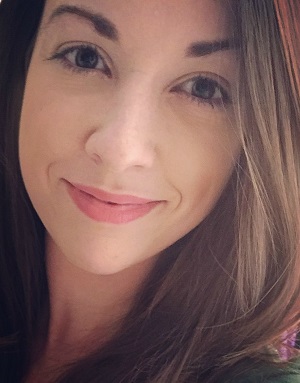 Kelsi Nuss
Born and raised in Alabama, Kelsi Nuss has been exploring the Deep South for writing inspiration since she was just a small (town) girl. This passion led Kelsi to Auburn University where she earned a BA in English and creative writing and began her career as an anything-and-everything writer and a someday novelist. Her fiction has been published in Auburn University’s student literary magazine, The Circle, and various other pieces of Kelsi’s have been featured online. Her growing interest in cannabis advocation brought her to Leaf of the Week, where she works to destigmatize the plant one blog post at a time. When she’s not out saving the world with her dazzling web content writing, Kelsi is at home with her husband and daughter listening to music too loud and plotting their next adventure.
Tagged: #LeafoftheWeek#weedaboutbouldercannabiscannabishealthCBDMarijuanaTHC