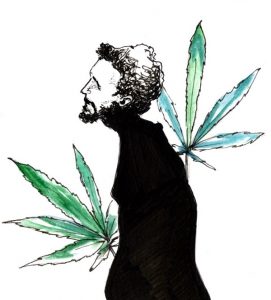 When you are on the pro-marijuana side of things it is hard to admit if there is any risk to using it. Both sides debate potential hazards of cannabis, but the topic of addiction rarely comes up. Are you addicted to weed? If your significant other, a job, or your parents asked you to stop do you think you could do it? The answer is yes you can do it because you are not addicted to weed. Weed fills the void when life gets a little mundane is all, and what some of us can develop from using it over time is a slight weed-dependent mindset. Quitting is simple, if you want to quit you got this. Don’t sweat it homie. Start with a little green tea and exercise, take deep breaths throughout the day and go for a walk. It is nice out today.

I consider us all lucky because marijuana dependence can be easy to remove yourself from, unlike pretty much everything else. Dependence and addiction are different. Dependence is when someone develops a tolerance and experiences a little withdrawal after they stop using it. Addiction is defined as compulsive engagement in an activity despite adverse consequences. Bob Saget had a great line about this topic in Half Baked, you remember, right? The term addiction is often misused and possibly misunderstood, frequently when referring to dependence. I quit drinking caffeine eight months ago and the first week or so when I was going through withdrawals my friends thought I was sick, I was much more tired than normal, and the days seemed to drag on forever. I looked like I was auditioning for the remake of Trainspotting. I was hurting because I was addicted to caffeine and it showed, that does not happen with weed. Addiction varies person to person, and although I managed to quit, it is eight months later I am still yapping about quitting caffeine, while secretly thinking how I would kill for a cup of Italian roast with a little cream and sugar. When I walk away from weed it does not remain on my mind.

I will be the first to admit it, I have a dependence on weed, but I do not believe it to be a crutch or something that has affected my life negatively. I just smoke mad weed is all. I do not feel it has hurt my chances at anything, and I stop smoking for a few weeks every year just to remind myself of this very topic. It is important to show myself that I control what I want, nothing controls me. Well, women seem to have a power over me that I cannot explain. If I had to quit smoking weed things would be alright. I could not quit women however, they are just fantastic. By quitting weed I might find myself bored a little more often is all, but that is a common theme among my generation, we were bored. Personally speaking, my own weed dependence may be more closely related to something along the lines of being “addicted” to that tv show or video game you really like. You think about it, watch it every chance you get, but at a certain point the tv show ends and you just stop craving it because it is done. It is like any form of entertainment or escapism really and if you become reliant on it, you are going to crave it. You can get addicted to pretty much anything this way. Honestly, for me, the hardest thing about quitting smoking weed is the vivid dreams that come back. For a night or two I will wake up in a sweat remembering things that happened twenty years ago, not nightmares, just random thoughts and memories coming back. That is in addition to the irritable person you will become for a couple days, like me with the coffee thing. There is nothing more irritating than hearing your friend who quit weed this week talk about it all day long. “Man, I don’t even smoke that sh%t anymore!”, they will say from their soapbox as you are puffing down on a solo bong load.

Marijuana is a large subculture with a community atmosphere that depends heavily upon cannabis consumption. Sometimes it can be pleasant to step away from that for a few days though. Cannabis is not hard to ween yourself off and it should not take more than forty-eight hours to check that dependence. I quit caffeine, and I thought that would be the one thing I would never be able to quit. Jeez, there I go again bragging about quitting caffeine. Like caffeine though, or sugar, or macaroni and cheese for that matter, cannabis is way more fun and enjoyable when used in moderation so no need to overdo it. Unless you are watching fireworks, then it might be alright to overdo it a little. Fireworks look cool on weed after all. Happy Fourth of July!

Chris Fisher
Chris grew up in Dover, Delaware with his sights set on the wild west. Inspired by 80’s and 90’s- era ski movies Chris found his way to Gunnison, Colorado in 1999 to attend Western State College, now Western State University, and to ski Crested Butte. In this little mountain town in the heart of the Sangre de Cristo mountains Chris also found a lovely little plant called cannabis. Chris still lives in Colorado, having moved to Steamboat Springs after graduating to follow his love of skiing, mountain biking, and all things outdoors. Currently working as a budtender with 7 years experience in the cannabis industry Chris has a passion for cannabis, a desire to write, and a love for Colorado.
Tagged: #BobSaget#cannabis#cannabisculture#cannabislifestyle#confessionsofabudtender#greenteacannabishealth