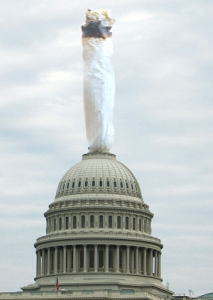 Remember last week when we discussed how, in contrast to President Obama, the Trump administration may be enforcing federal marijuana laws, regardless of legalization at the state level? Well, Attorney General Jeff Sessions said that if Congress did not like his hardline approach towards criminalizing marijuana, they should change the law. That sounds like a threat.

There is no doubt we have reached a virtual weed watershed. Twenty-eight states have decriminalized marijuana, and 8 states, plus D.C., are permitting anyone over 21 to toke up. According to the latest Quinnipiac National Poll, 70 percent of the population believes the feds should not enforce federal law against states legalizing weed. 70 PERCENT!! We the people are ready for Congress to act.

Don’t get too excited though because we all know Congress is broken. Our legislators forget they represent actual people back home. What they don’t forget are big pharma, the private prison system, and alcohol lobbies. For now, Washington helps keep those industries churning because marijuana is classified as a Schedule 1 narcotic under the Controlled Substances Act. Schedule 1 drugs are defined as those with no currently accepted medical use and those that have a high potential for abuse. Are you laughing yet? It’s true. Per the feds, pot is the same as heroin, LSD, ecstasy, MDMA, GHB and other drugs that we know have induced worse things than eating an entire bag of Cheetos.

In walks our hero, Representative Tom Garrett. He’s not from California or Colorado, or any other state with legal cannabis. He is a REPUBLICAN from West Virginia. With three Republican and three Democratic co-sponsors, he has introduced the Ending Federal Marijuana Prohibition Act of 2017 (H.R. 1227). Granted, this bill was originally brought before the Senate by Bernie Sanders in 2015, but was buried in committee. Two years of growing public support for state autonomy of marijuana enforcement, however, may give Garrett’s effort more oomph.

This legislation would take cannabis off the federal controlled substances list and treat it more like alcohol and tobacco. Federal law would only apply to marijuana if transported from a state or foreign country into another state where marijuana is illegal under state law. Otherwise, pot would be a state concern.

How reasonable is that? Completely reasonable. States would have freedom to determine appropriate medical and recreational sales, and allow for industrial hemp growth. As we have already begun to see, these economic opportunities are substantial. On the flip side, those states disapproving legalization measures would have federal assistance to keep cannabis from traveling into their jurisdiction. Win, win.

The time is now, folks. Call your Representatives!

Emy Taylor
Emy Taylor, raised in Texas, often wears multiple hats. She graduated Magna Cum Laude from Texas Woman’s University in 1996, with a B.S. in History. Emy attended law school at Ohio Northern University, graduating with Distinction in 2001. Before starting a successful litigation career in Dallas, she completed an appellate clerkship with the 13th District Court of Appeals of Ohio. In the evenings, she donned a singer-songwriter hat and gigged multiple nights a week. American Songwriter Magazine recognized her writing in 2013, and she was published in the 2015 anthology, Her Texas: Story, Image, Poem & Song. In 2014, the time came for her outdoor adventure cap to take center stage. Emy donated her professional clothes and headed to remote Alaska with a backpack, guitar, and pen. Next, she made her way to the ghost town of Terlingua, her spiritual home, near Big Bend National Park. Currently, she resides in Downeast Maine, where sea kayaking feeds her soul. So, when the time came to use her legal background to add weed blogger to the hat rack, Emy thought it seemed perfectly fitting.
Tagged: #cannabis#cannabisculture#habeascannabis#newweedlaw#weedcanna lawcongressH.R. 1227legalizeMarijuanapoliticspotTom Garrettweed law