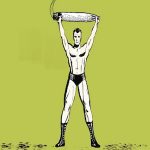 Welcome to Cannabis Health Quick Fix, where every week we explore fast facts about cannabis! For the first installment, let’s talk weed and working out. Did you know? A marijuana high and what’s known as “runner’s high” (that amazing feeling you get when you’re flooded with endorphins during exercise) are not so different. It turns out that in addition to releasing those feel-good endorphins, exercise lays it down on the body’s endocannabinoid system in much the same way marijuana does. Apparently, when you exercise, the levels of human-produced cannabinoids rises, gifting you for... Read More