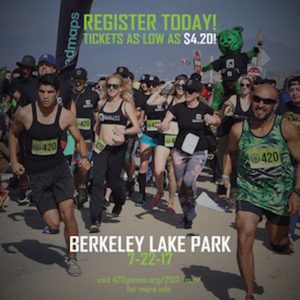 There is a new industry taking the cannabis community by storm, and it’s CannaFitness, also referred to as cannabis and athletics, or cannabis and sports. With so many professional athletes, and everyday gym goers, coming out of the green closet, it’s making it very clear to the public that cannabis consumers are not lazy. Having so many people stand up, to end the age old stereotype of cannabis making you lazy and stupid, people from all walks of life now have a distinguished flag to rally behind. That flag is the 420 Games, and they’re coming to Denver on July 22!

So far, my wife and I have competed in every 420 Games event this year, in our challenge to complete the entire 420 Games 2017 Tour and more. So far, the 420 Games tour has taken us to Los Angeles, CA,  Seattle, WA, and Portland, OR. This has given us the opportunity to put our own promises to advocate for marijuana, fitness, and nutrition into action, while also assisting the 420 Games in their mission to forge a new outlook on cannabis, and cannabis users.

With this being their fourth year in operation, and only second year touring nationally, the 420 Games is still in its infancy. Yet among the CannaFitness, and cannabis communities alike, it is infamous for creating a positive image for cannabis consumers, in a lead by example way, as demonstrated in participants efforts to complete a 4.2 mile course, which is a 5k, plus an extra mile. This extra mile is not just to physically prove cannabis users aren’t lazy. It represents everything the entire cannabis community is trying to accomplish. We want access to safe, regulated cannabis available to all who need it. In order to to see prohibition ended, the public needs to see cannabis for what it really is, a health and wellness product that shouldn’t carry a negative stigma.

This is what makes the 420 Games such an important series of events. It’s not just for athletes, or people interested in health and fitness. It’s for everyone who believes cannabis can help improve the quality of people’s lives, and want to make a difference. By just attending a 420 Games event, you have the opportunity to participate in our nation’s history, as you join the charge in creating the new image for cannabis, which is going to make serious positive changes in our society. With that being said, let’s talk about what you can expect when the 420 Games comes to Denver!

This non-consumption event is all inclusive, family friendly, and very laid back. Everything kicks off with friendly conversation among participants and vendors as everyone gets registered. Prior to starting the race, you can expect to gather for a yoga warm up in front of the 420 Games main stage, followed almost immediately by lining up to begin. The race forgoes the traditional 3, 2, 1, and instead, we all count down 4, 2, 0, GO! Upon finishing the race, there is typically a yoga cool down, again in front of the main stage, leaving plenty of time to walk the village and visit with vendors, rest, or get something to eat.

Do you have to run the 4.2 mile course? No, but you can walk, bike, skate, or ride your way to the finish line, or even just come for the 420 Games Village to hang out. You’ll get to meet a bunch of incredible people, including several industry sponsors and exhibitors, all while enjoying great music, educational speeches, and some stand up comedy! If you think that isn’t enough, did we mention the Professional BMX Stunt Team who’s going to be performing sick tricks right in front of your face, all X Games style!? Yeah, they’ll be there, and you’ll meet the team while you’re there and get some autographs!

Speaking of autographs, you should definitely try to get some more after you have the chance to compete with, and against, former professional athletes to determine who has the best kickball skills in, The Athletes For Care Kickball Tournament!! The tournament will feature six teams and each team will have a former pro-athlete as captain. The team captains include UFC legend Frank Shamrock, Tatum Bell and Charlie Adams from the Denver Broncos, hometown hero and former NFL-stars Marques Harris, Eben Britton from the Jacksonville Jaguars and more to be announced soon!!

Clearly, this is an event not to be missed, so put on your shoes, or get on your wheels, and come out to be a part of history. Bring your family, friends, coworkers, or neighbors! Strap your kids in the stroller, your pets on their leashes, or vice versa if that’s how you roll! Everyone is welcome, and I personally encourage you to join my wife and I at the event, and to share news about The 420 Games with everyone you know. The 420 Games is the powder keg behind the explosion of the CannaFitness industry, and is setting a precedent in our country, and throughout the world.

Founder of the 420 Games, Jim McAlpine, his team, and all of the terrific people who volunteer at the games, deserve a sincere thank you, and a big round of applause for creating and continuing to grow this event. By literally going the extra mile, we prove to people like US Attorney General, Jeff Sessions, cannabis doesn’t make you lazy, unsuccessful, or a bad person!