Home » Confessions of a Budtender » Nobody Likes A Weed Snob

Last week Curtis, the ultimate weed snob, was in town from Boulder. He had just finished skiing and was jamming out at a concert when a joint was passed his way. First, he smelled it, using two fingers to waft a little of the smell into his nose. He asked if it was a pure indica, a pure sativa, or god forbid a hybrid doobie. He asked the person who handed it to him if it was weed grown in soil or hydro? “What kind of ‘noots’ were used in the growing of this plant?” Was it the LGS or was it the buds with the little red hairs, he considered? He inquired about the name and if there was any knowledge of its genetics. Then finally, after allowing a sizeable amount of the joint to burn down during analyzation, Curtis took his first hit. The girl who handed Curtis the joint began to answer but he rudely cut her off. “Judging from its flavor profile this must be a new strain”, he commented. Barely a moment had passed before he realized that joint was some of the finest weed he had puffed in a while, it was that true sticky icky chronic, and it had a familiar taste. He got to pull two hits before passing it, that is the rule ya know, then the band picked up, the people started moving, and the joint disappeared entirely. For the remainder of the show Curtis looked all over but saw no joints like the one from earlier, and could supply no details regarding the strain or its grower. Due to the assortment of people in ski gear it was tough to determine exactly where in the crowd that sweet-tasting cannabis had come from. Did it even happen he began to wonder? Curtis was afraid that he had missed his window and later, when asked by friends, could supply no details as to the type of flower that had been twisted into that delicious joint, only its story. “Do you remember anything at all?”, they asked, “the way it smelled perhaps?” Curtis returned to the fatty spliff in his mind, although a little blurry, and realized there had been an aroma. When he first got the joint he did his best two-finger waft to get an adequate smell before taking a hit. He recalled that it was sweet and combined nicely with a sugary flavor on his palate. Then there was the buzz that he was still riding, going strong even though the concert had ended. It was while he was thinking over the effects of this mystery strain, with its combination of a strong physical buzz, and a positive head high that it hit him. “Find me the nearest dispensary”, he said, “I need to get some Bubble Gum!”

It should be noted that Bubble Gum is a very easy strain to distinguish and most dispensaries will carry it. There is an abundance of weed snobs out there, but Curtis is an example of the newest breed to come around, and sometimes I wonder how accurate he really is. He is an impressive opponent to anyone in a prohibition state but in the wild west he sticks out like a sore thumb. Being a weed snob is part knowledge, part showmanship, part bluff, and can currently be achieved with minimal training. You can usually spot a weed snob as being the person with the loudest opinion in the room. Like the wine connoisseur who spouts off about enjoying a really good red, this “weed connoisseur’s” knowledge mainly consists of smoking tons of weed. As a budtender you do not need to bother these people with your opinion, along the way they have absorbed all the knowledge they need and are no longer open to discussion. Beware of these jokers.

There can be a thin line between weed sophistication and weed snobs. Many of us do have an interest in getting to know as much about this plant with its long-reaching capabilities as we can. Maybe soon I will offer a “how-to” on becoming a proper weed snob? In the meantime, I can encourage all of you to read whatever is available, and if cannabis is legal in your state grow it. Cannabis can grow in your garden or in your window, it is not called weed for nothing. Familiarize yourself with snobby phrases like “terpenes”, “decarboxylate”, and “endocannabinoid”. Get to know who people like Raphael Michullem are and inform yourself on cannabidiol (CBD) as well as the benefits of lesser known cannabinoids like CBN, CBC, and DTHC.

Weed snobbery will not end anytime soon so do not let this current wave get under your skin, having them in abundance is better than having none at all, and they are fun to laugh at. More to the point though is these folks come with legalization and the country is still working on that. Plus, we have already started to see the onslaught of the next group of snobs. You can spot these folks when they tell you things like, “I don’t even smoke flower anymore bro”. Prepare yourself cannabis enthusiasts, for the onslaught of the concentrate snobs. 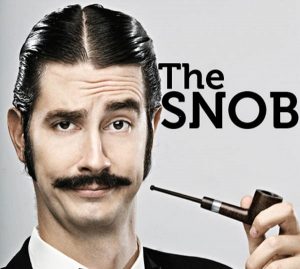 Chris Fisher
Chris grew up in Dover, Delaware with his sights set on the wild west. Inspired by 80’s and 90’s- era ski movies Chris found his way to Gunnison, Colorado in 1999 to attend Western State College, now Western State University, and to ski Crested Butte. In this little mountain town in the heart of the Sangre de Cristo mountains Chris also found a lovely little plant called cannabis. Chris still lives in Colorado, having moved to Steamboat Springs after graduating to follow his love of skiing, mountain biking, and all things outdoors. Currently working as a budtender with 7 years experience in the cannabis industry Chris has a passion for cannabis, a desire to write, and a love for Colorado.
Tagged: #boulder#BubbleGum#cannabis#confessionsofabudtender#Curtis#doobies#hybrid#LeafoftheWeek#stickyicky#weedsnobaboutboulderbudtenderCBDindicaMarijuanasativa